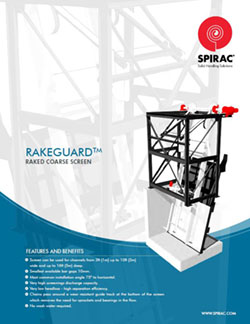 RAKEGUARDTM is a robust front raked bar screen that is well suited to raw sewage applications. The screen can be used for municipal and industrial wastewater as well as process water screening, where large concentrations of debris are expected.

With the RAKEGUARDTM wastewater passes through the grid and captured screenings are removed by a chain-operated rake that moves up the face of the grid. The screen comes with replaceable prongs that fit into the grid.

RAKEGUARDTM comes with a function that detects large objects and keeps the screen operational. The debris can be discharged into a shaftless screw conveyor system or launder trough. Two chains move the rake up and down and an overload sensor can be used to protect the mechanism during movements of the skip.

While the rake moves down, a control mechanism makes sure the guides are swung clear of any screenings. At the bottom the mechanism is operated, moving the guides back towards the screen grid, forcing the rake prongs into the spaces between the grid bars. This ensures positive engagement of the prongs with the grid. Once the rake hits a rigid obstruction during its upward movement, the power demand will increase which sends a signal to the actuator to withdraw the prongs from the grid.

When the resistance to movement of the rake is low the rake will continue, if this occurs before the prongs have cleared the obstruction, part of the debris will be cut away by the ends of the prongs. Any unusual obstruction as the prongs are pushed into the grid will signal the screen motor to lift the rake clear of the obstruction. The provided sensors come with adjustable time delays before cutting out on overload. If the screen hasn’t cleared the obstruction within the pre-set delay the screen cuts out. Once the RAKEGUARDTM screen operation is blocked, mechanical overload protection interrupts the operation. The RAKEGUARDTM screen mechanism is set out of the wastewater stream when it isn’t operational. All RAKEGUARDTM installations are customised to our client’s needs and can be installed in new channels or retrofitted into existing channels.

The holiday season is a time for reflection, but that doesn’t mean our workshops will grind to a halt. We...

Our service teams take pride in making sure our equipment delivers on its promises. They are available in...

Our technology for specialised screening, grit and sludge handling solutions was called for South East...

Lundåkraverket WWTP is situated in the municipality of Landskrona, Sweden. It is equipped with mechanical...

SPIRAC was contracted to upgrade the Inlet Works Area for this project to allow for future population...

When it comes to sludge storage equipment, there aren't a lot of solutions that have the usage history and...

SPIROWASH® is ideally suited to applications – also retrofits – where its capacity, robustness, compact...

A BIT OF SHAFTLESS CONVEYOR WISDOM: Shafted vs. Shaftless Conveyors

Take a look at our infographic to find out more about the advantages of a shaftless spiral versus a shafted screw...

Read more
SPIRACs engineers had an uncompromising commitment to develop and manufacture a leading inlet works solution within time and budget, allowing us to develop a sustainable plant for the future
Mr. Davie
Goondiwindi, Aufsichtsrat/Entwicklungsberater
Great system. We have it onsite at Rubyanna WWTP, recommend them for any plants for the future or even retrofitting! Flawless and easy! Also recommend SPIROTAINER. Less than 5 minutes from entering site with one and leaving with a full one! Great idea guys.
Sean Watteau
Downer, Kläranlagen Treatment Plant Manager
Equipment works wonderfully at our plant to move biosolids for processing. No problems found so far, clean and low maintenance.
Jacob Colins
Lystek Fairfield - Anlagenbetreiber / Produktkoordinator